Includes: Train Kept a Rollin', I Can't Quit You Baby, Dazed and Confused, White Summer / Black Mountain Side, You Shook Me, How Many More Times, Communication Breakdown

[Review by Paul Rosano, 2011]  In early August, 1969, there was quite a buzz about Woodstock. I don’t believe anyone, even at that late date, anticipated how big it was going to be. At least not among my friends.

Most of us were not planning on a trip to upstate New York though. On Sunday the 17th during the festival weekend, a concert was scheduled at the original Oakdale Music Theatre, with its theatre-in-the-round stage, in Wallingford, Conn., that was not to be missed, Led Zeppelin.

We’d seen Cream there the previous summer and myriad other mid-to-late ’60s acts: The Paul Butterfield Blues Band, Lovin’ Spoonful, Ray Charles. Shows I didn’t get to see included The Who, The Doors and Chicago. One of my bands, The Bram Rigg Set opened for The Dave Clark Five in late summer, 1967. It was an almost-perfect venue to get an up-close look at performers. Seating was perhaps no more than about 2,000, the closest within about 15 to 20 feet of the musicians, sometimes even closer when they came to the edge of stage, which was only a few feet off the ground.

Zeppelin’s first album was released in early 1969 and it made quite an impact. Surprising really. Jimmy Page was well known and I’d seen him with the last version of The Yardbirds in 1967 at the Village Theater in New York. But Robert Plant, John Paul Jones, John Bonham, where did they come from?

The first album pointed the way for rock bands into the 1970s. More hard-edged than Cream with elements of folk, blues, rock, even Celtic and what would be called world music later, showing off Page’s guitar skills as never before and introducing an unusual and distinctive voice in Plant’s that would set standards throughout the next couple of decades. Still does actually.

The immediacy of Oakdale can’t be overstated. We were in first-row seats, luckily, among about two or three other friends. Zeppelin had what normally would be a stack of Marshall amps on each side of Bonham’s drums, but they were set up with the cabinets one-high rather than stacked. This was because Oakdale was trying something different for this concert, something it would stick with into the 1990s when it was converted into a proscenium theatre.

The stage was going to revolve for this show. That’s right a revolving stage. That was good and bad. It mucked up the sound terribly with Zeppelin very loud and full for several minutes then fading when you were literally in back of their speaker cabs. The good bit was that the disenfranchised audience that sat opposite the sound booth and entrance way to the stage and had sat through so many concerts looking at the back of entertainers, at least at rock concerts, now could see the group for at least half of the time from the front.

Zeppelin had already been to America several times in its short lifespan. This was I believe their third tour of the year. They were scheduled to play through August, including a show at the Texas International Pop Festival in Lewisville, Texas, which has been quite available over the years and is remarkably similar to the Oakdale set.

The group opened with Train Kept-A-Rollin’, a Yardbirds staple with a fierce, driving rhythm. But it was short-lived as the group surprisingly went into the slow blues I Can’t Quit You Baby. That seemed an odd way to start a concert.

I was a big fan of John Mayall and when hearing Page’s interpretation of this blues classic on record, I didn’t really like it as much as the Bluesbreakers with Mick Taylor’s take on it. But seeing Page play it live changed that. For one thing, the riff, which sounds kind of dirty on record, sounded brilliantly clean in concert. In fact, almost all of Page’s more technically adept guitar parts that utilized speed came through cleaner live. I thought that strange but it was undeniable.

Parts I thought he was just making in the studio were stunningly on the mark with no missteps at all. And the tone from his Les Paul was sharp and crisp with powerful sustain. I found out later that the unusual riff he played in I Can’t Quite You Baby is actually much closer to the Otis Rush original as well.

Zeppelin also made a huge visual impact. The good-looking Plant with complete command of the stage, moving fluently as he unleashed his high, proficient and acrobatic voice, and Page often coming to the edge of the stage head down, bent over with his knees pointed inward almost touching each other, are lasting impressions.

Jones, of course, was understated as he would be throughout the band’s life, and Bonham explosive from in back of the kit, particularly when he was featured in a solo near the end of the set.

Next came the tour de force Dazed And Confused, the origin of which has been written about often, even here. Suffice to say what was easily my favorite track on an album of favorites came off perfectly live, featuring Page with violin bow in hand, wrenching all types of unearthly sounds from his guitar.

They also played You Shook Me and closed with How Many More Times, with more mini-sections tucked in the middle than on record, including some soul diversions, vocal and guitar exchanges and a drum solo. The encore was Communication Breakdown.

A powerful performance that had a hyped-up quality unlike any concert experiences I had to that point. The only qualm was the revolving stage but in all that was slight given the show in total.

Zeppelin’s second album was already being finished up in August of ’69 and would be released later in the year. The group didn’t play anything from it. That second offering would solidify their place among the rock elite with some startling versions of blues classics, including Whole Lotta Love and Killing Floor (The Lemon Song), two more for which the group would eventually be admonished because of credit taken. Still, they introduced something new and fresh to the hard rock-blues genre. Something that still holds up today.

Includes: Train Kept a Rollin', I Can't Quit You Baby, Dazed and Confused, White Summer / Black Mountain Side, You Shook Me, How Many More Times, Communication Breakdown 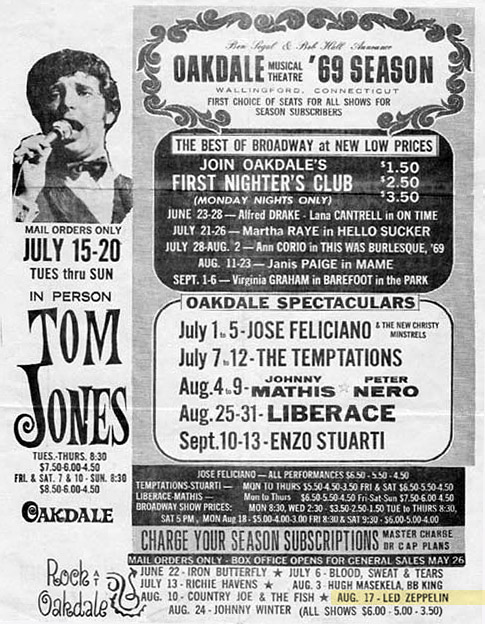 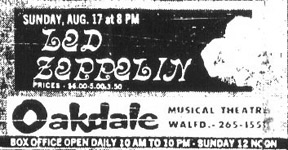 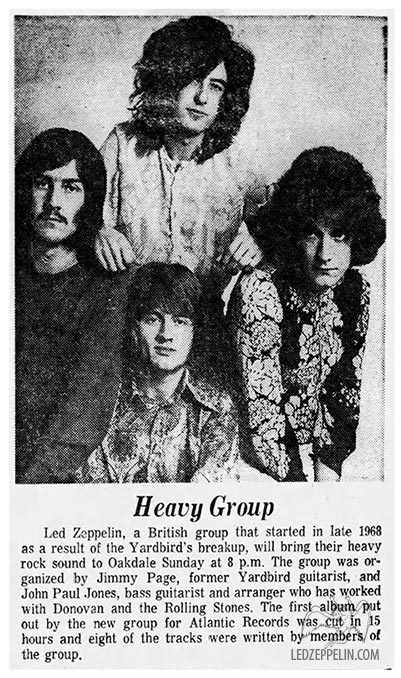 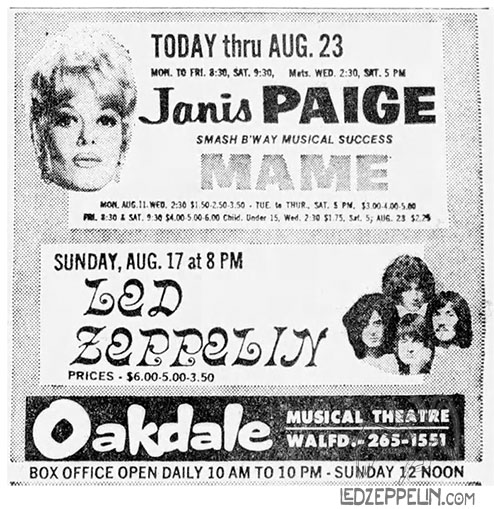 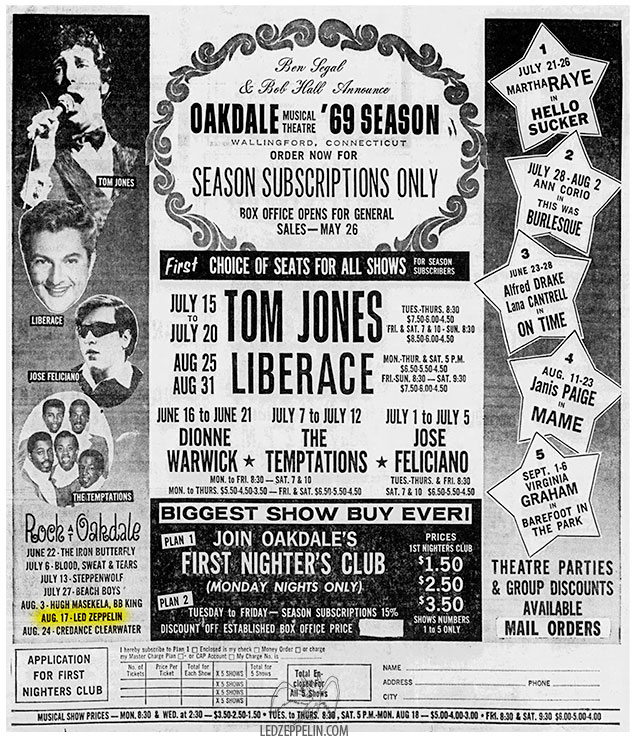