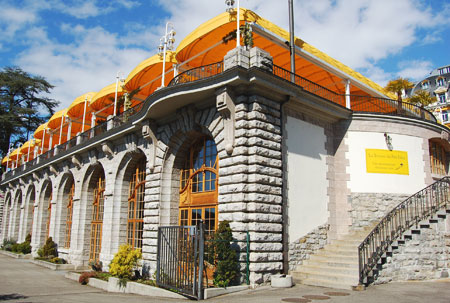 The Pavillon was built in 1906 and became the "Petit Palais" in 1994, situated just opposite the Montreux Palace.

Every afternoon, this place welcomed women who would spend their time drinking tea and tasting cakes. Later it was converted into sport activities and called “Pavillon des sports” where international rink-hockey competitions took place. The local rink-hockey club would pratice there every week. The Rock/Pop/Jazz concerts took over in the hall situated in the ground floor just opposite the lake. The main structure of the Pavillon has remained, up to the present days, almost the same. The upper floor was, for many years, the home of the “Strobe Club”. A modern, up to date disco with psychedelic lights where Claude Nobs was working in organizing many night parties in 1968. Then the “Hazyland” disco, cabaret style, place to be seen, replaced the “Strobe” and was entertaining the clubers and the great amount of congress people always around in town. A live band was performing almost every night.