Rock and Roll, Sick Again, Over the Hills and Far Away, In My Time of Dying, The Song Remains the Same, Rain Song, Kashmir, The Wanton Song, No Quarter, Trampled Underfoot, Moby Dick, How Many More Times, Stairway to Heaven, Whole Lotta Love, Black Dog

A fan in the crowd gives Jimmy a jacket, which he wears during the encores.

A fan in the crowd gives Jimmy a jacket, which he wears during the encores.

For a band that’s been around since 1968, Led Zeppelin has done an astounding job of remaining one of the weightiest of the heavy heavies. Their five albums have sold more than a million units each; their last tour broke box-office records for a single act. Judicious touring may have a bit to do with their drawing power. Their last appearance here was in the heat of summer ’73; a year and-a-half later they arrived back in Chicago for a sold-out show at the Chicago Stadium, with repeats to follow Tuesday and Wednesday.

They are not, however, immortals. Lead singer Robert Plant, for instance, is just as susceptible as the rest of us to such mundane things as flu, which is what he repeatedly complained of last night. “Keep your fingers crossed,” he asked the audience before starting out on Stairway to Heaven, a Led Zep staple and one of their most impressive numbers. “We’re having some problems, I’m having an inability to come to grips with this climate.”

Unfortunately, he needed more than luck, because something like the flu, apparently – also had given him an inability to come to grips with most of the high notes he usually takes with ease and at times he had difficulty being heard over Jimmy Page’s guitar.

But despite the difficulties and Plant’s obvious dissatisfaction with his voice, the show could be termed a success – a blend of Led Zep’s strong pounding sound with drummer John Bonham knocking out the rhythm, interspersed with slightly softer, sweeter guitar work by Page and John Paul Jones on Mellotron.

Led Zeppelin always had been a band into giving people their money’s worth and Monday night was no exception – a two and one-half hour show with no warm-up act and no intermission. The repertoire drew from the old songs such as Stairway to Heaven and No Quarter – and brand new selections, from their forthcoming Physical Graffiti album, with an occasional bow to the theatrical with smoke screens, superb lighting effects, a sound system that was nearly a match for the Stadium acoustics and “Led Zeppelin” spelled out in lights come encore time.

Led Zeppelin pretty much played their collective tails off. If Plant’s lyrics were sometimes lost, the sound almost was uniformly solid, the hard heavy blues-rock hitting like an enveloping surf.

Page, practically frothing at the mouth with effort, turned in some outstanding guitar work, particularly when he turned somewhat subtler and Bonham’s drum solo, if inevitably long, at least was sufficient in impact to bring the comatose kid next to me to his (somewhat altered) senses.

All in all, it was a good evening for music, if not for Plant’s health. If he can get rid of the flu for succeeding shows, none of the apologies he kept making will be necessary. Even with Plant not up to par, Led Zeppelin still manages to make most of their competitors look sick. [Chicago Tribune, 1-22-75, Lynn Van Matre]

Rock and Roll, Sick Again, Over the Hills and Far Away, In My Time of Dying, The Song Remains the Same, Rain Song, Kashmir, The Wanton Song, No Quarter, When the Levee Breaks, Trampled Underfoot, Moby Dick, How Many More Times, Stairway to Heaven, Whole Lotta Love, Black Dog 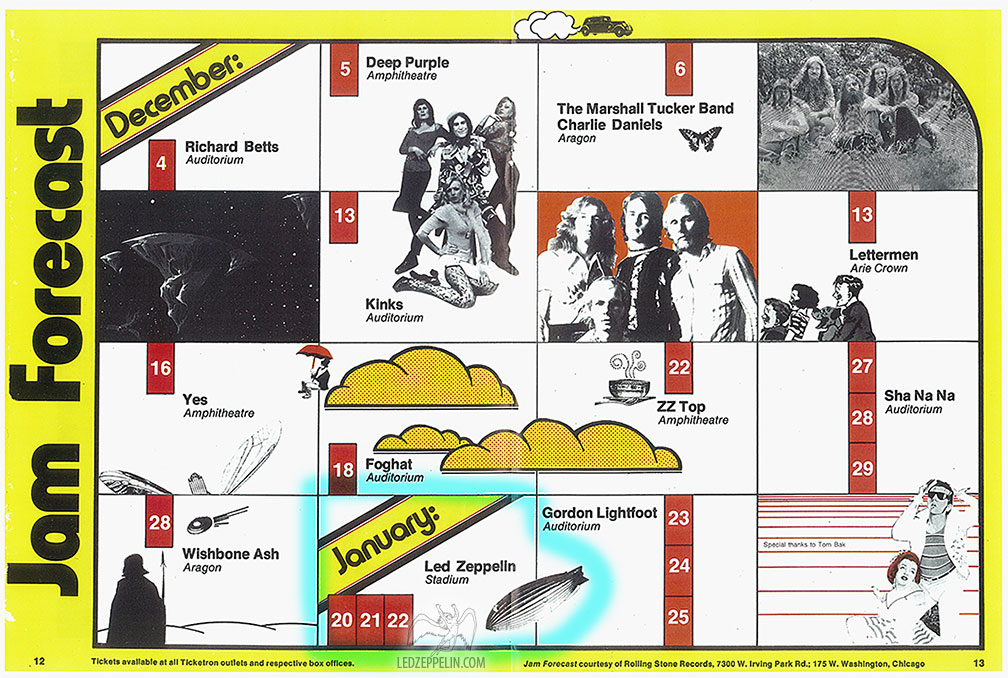 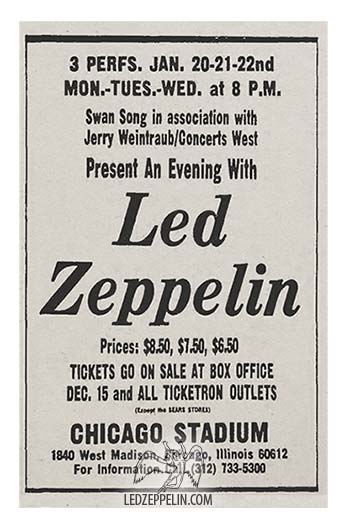 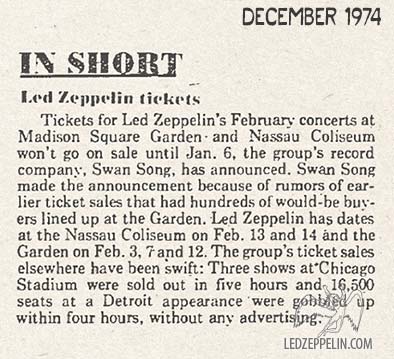 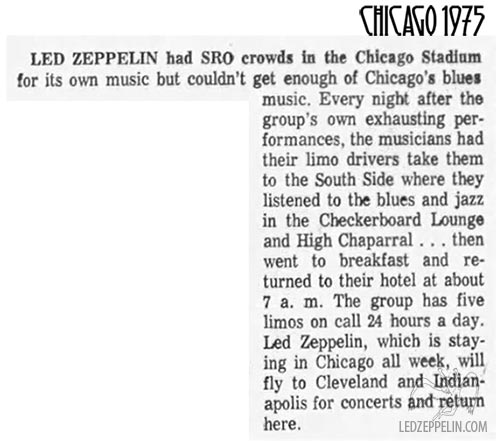 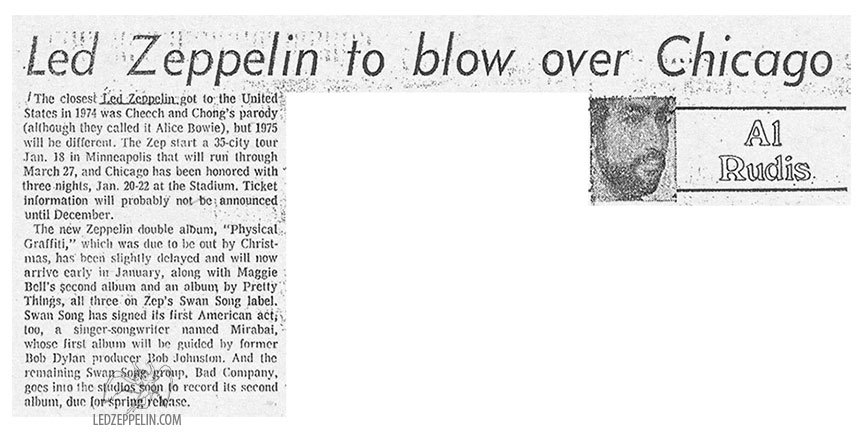 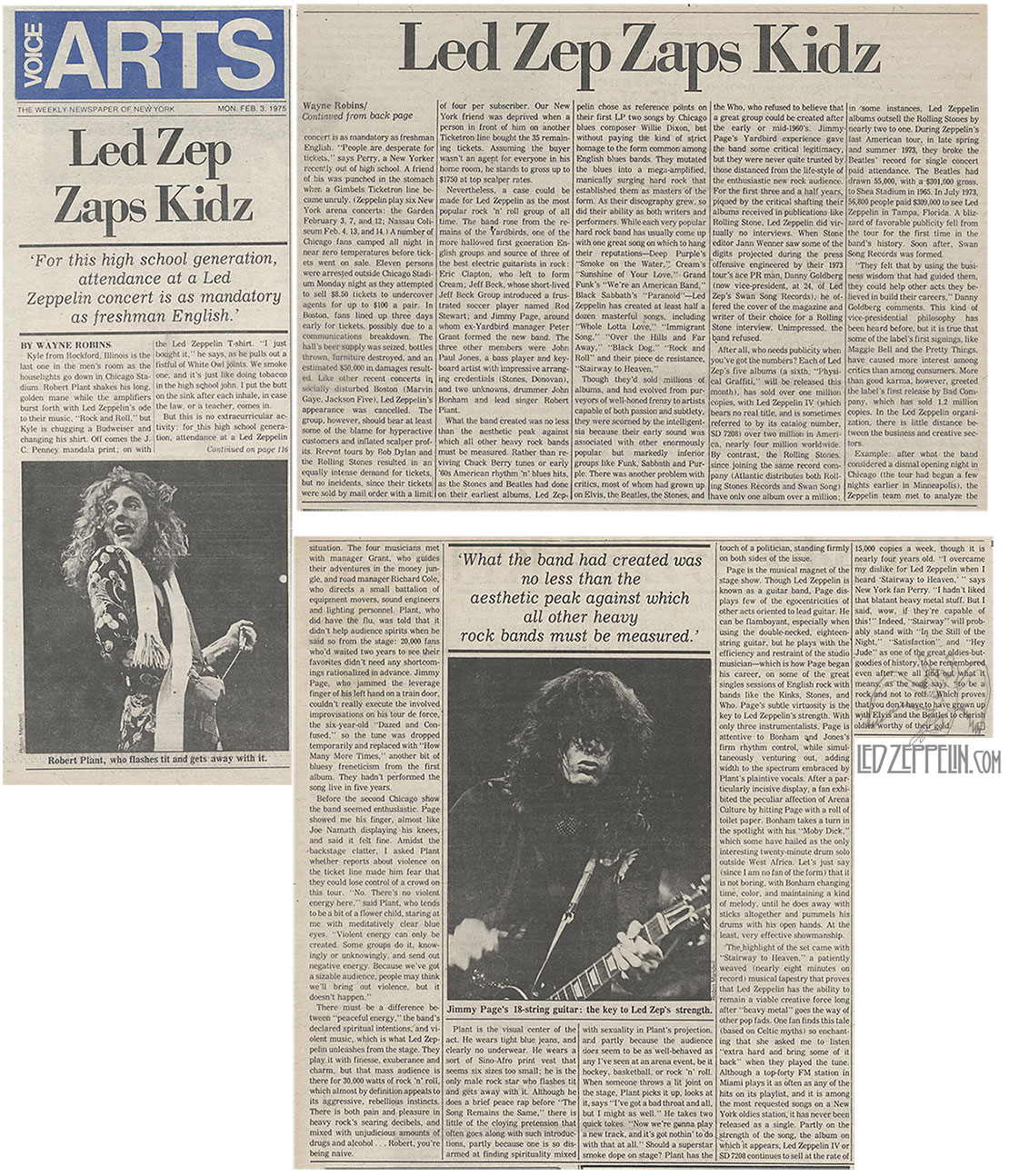 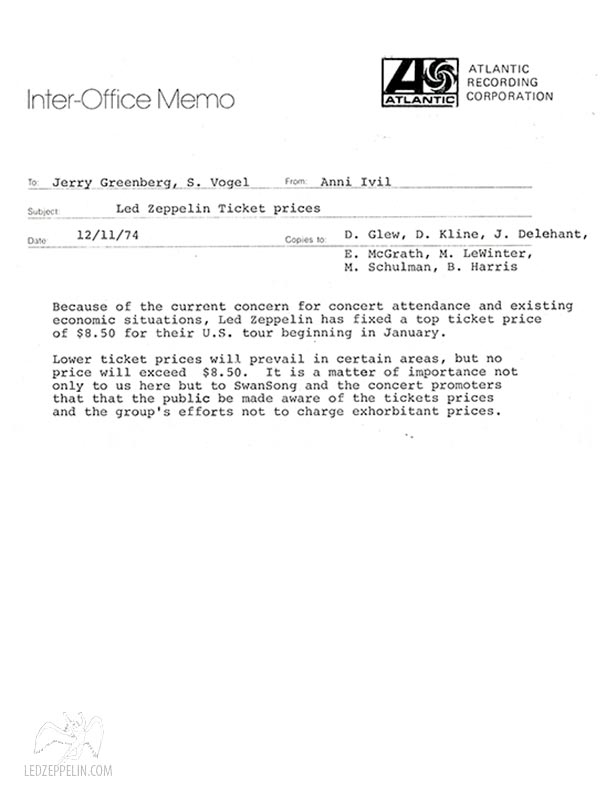