Includes: We're Gonna Groove,  Dazed and Confused, Heartbreaker, Bring It On Home, White Summer / Black Mountainside, Since I've Been Loving You,  Organ solo / Thank You, What Is and What Should Never Be, Moby Dick, How Many More Times, Communication Breakdown, Whole Lotta Love.

Not since the burning of the Hindenburg in 1937 has a blimp caused so much excitement as the rock music group Led Zeppelin did Saturday night at the Coliseum.

More than 10,000 avid sound seekers were more than satisfied by a surprisingly solid 2 ½ -hour performance that capped a week-long WIFE pop music festival.

Their music is “heavy" psychedelic sound, continually interrupted with instrumental jam session-type takeoffs and solos. The performance was only hurt by the echoing rafters of the Coliseum which caused a dominant rumbling of the bass guitar and drums heard over the vocal output.

The crowd at first seemed unsure of the group, many persons roaming the corridors invading the concessions when the instrumental take offs didn't appeal to them.

The group did some of its familiar material, which included "Heartbreaker," "Bring It on Home" and "Ramble On," as each player was spotlighted throughout the show.
Lead guitarist Jimmy Page, costumed in pink velvet bell bottoms pink shoes and a plum silk shirt,  was the first to ''do his thing" with a 15-minute guitar solo. His variations with a violin bow across the guitar was a spellbinder.

Bass guitarist John Paul Jones soloed on a switch to the organ, followed later by drummer John Bonham's 20-minute act in which he played two sets of drums, bongos and a Chinese gong with and without the drumsticks. The drummer was applauded nine times during his performance and earned a standing ovation.

At 10 o'clock, lead singer Robert Plant, clad in tight denim bells and made-up about his lips and eyes, announced they were going to finish the show. About 1000 viewers who wanted to beat the traffic left early and missed the best part of the show.

The “last song," which lasted almost a half hour was actually a wild combination of dancing, songs, musical ad libs and sexy verses which brought the crowd to its feet rhythmically clapping to whatever the beat changed to.

Their closing song ended and the Coliseum rumbled with enthusiasm in chants for more music from the group. Led Zeppelin did return, this time to do the group's biggest career hit, “Whole Lotta Love,'' the song that everyone had been waiting for.

It wasn't necessary for the crowd to rise to its feet in appreciation for this one. They had been up for 45 minutes. [by Z. Dunkin / Indy News]

Setlists during this tour include: We're Gonna Groove,  Dazed and Confused, Heartbreaker, Bring It On Home, White Summer / Black Mountainside, Since I've Been Loving You,  Organ solo / Thank You, What Is and What Should Never Be, Moby Dick, How Many More Times, Whole Lotta Love. 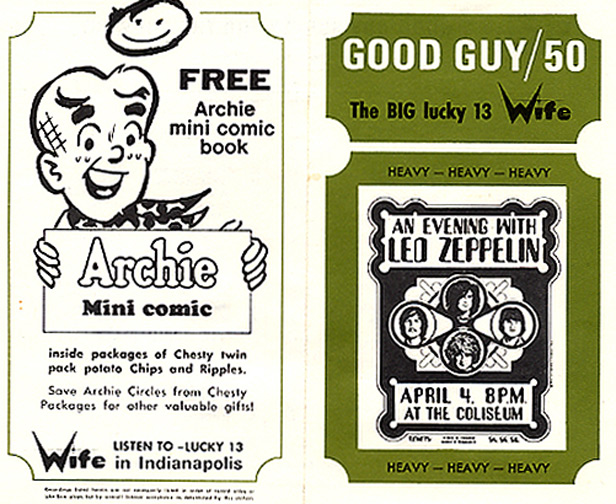 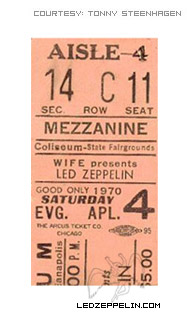 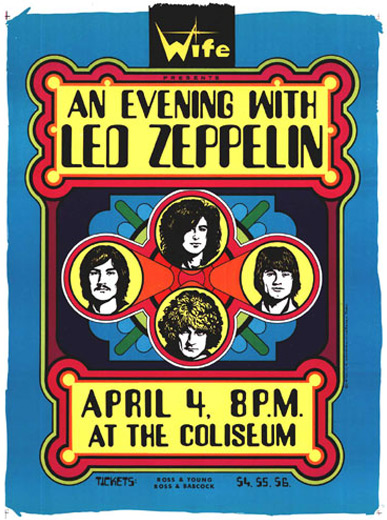 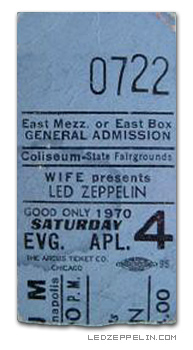 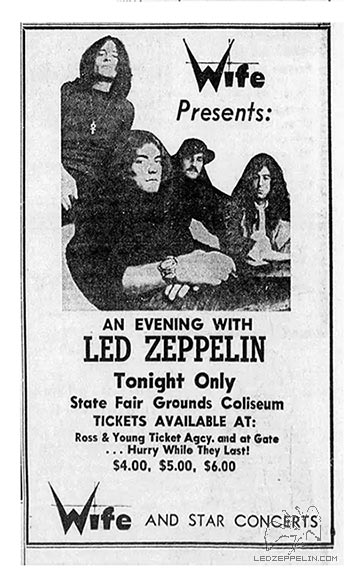 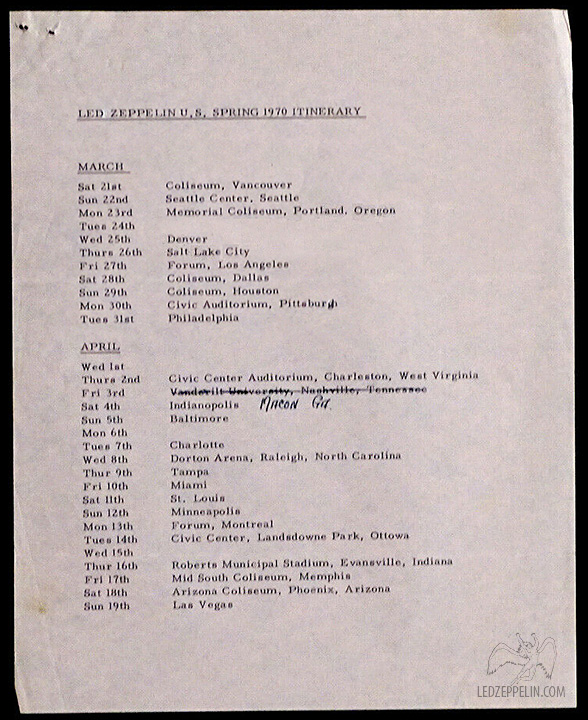 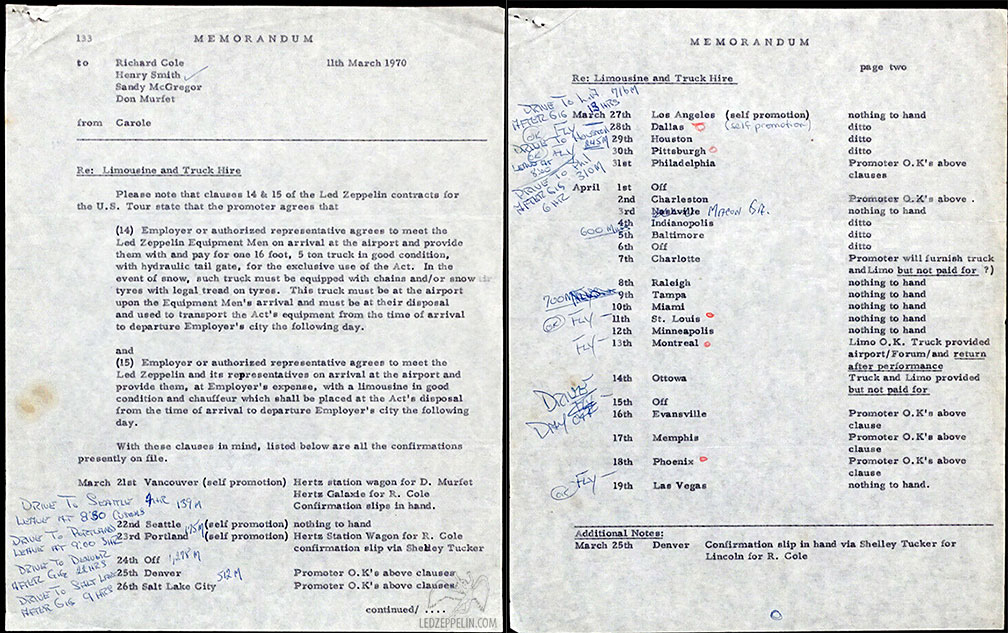 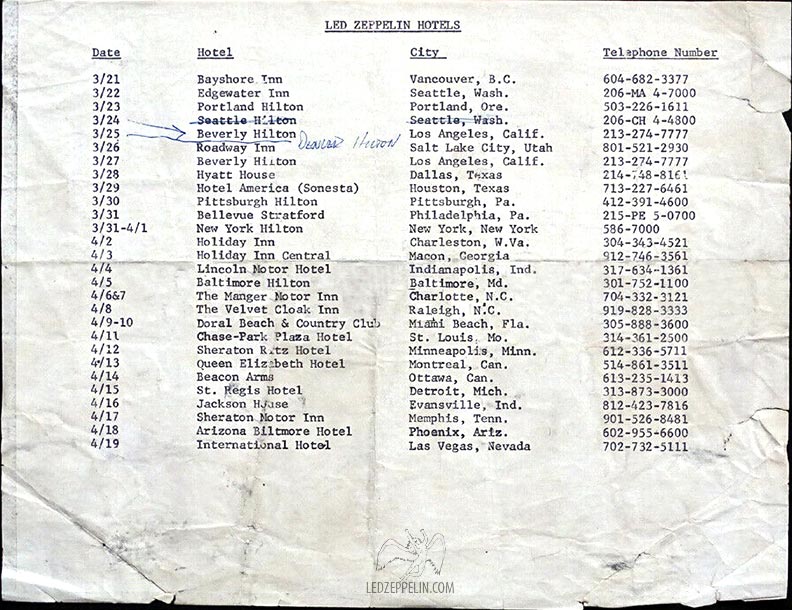