Songs performed during this period include: Train Kept a Rollin', I Can't Quit You Baby, Dazed and Confused, As Long As I Have You, Killing Floor, White Summer / Black Mountainside, You Shook Me, How Many More Times, Communication Breakdown.

Hail and farewell this weekend at Fillmore West. Goodbye to Country Joe and his Fish, who swim their own ways after Sunday night and greetings to Led Zeppelin, as impressive a new British rock group as we’ve ever heard.

The Zeppelin has had some KSAN radio play in recent days but otherwise came in cold; no LPs, only two months organized and a pile of ad agency flack.But this Zeppelin is no lead balloon.

They already sound like a veteran group and soon ought to be ranked in the company of the Who, Rolling Stones and the late Cream.

Basic musical considerations account for my enthusiasm. Led Zeppelin plays in tune, on pitch and with a primarily ensemble approach. They’re musicians, not electronic tinkerers.
Their rhythm is steady but imaginative, moving easily through various tempos and juggling 2-4, 3-4 and 6-8 meters with informal ease. Drummer John Bonham even had a bolero beat going in the midst of a blues.

Led Zeppelin is awfully loud but not distorted. Lead singer Robert Plant doesn’t affect any southern or Negro influences but still wails and moans the old blues line like a Mississippi Delta veteran. He’s from Birmingham, England, by the way as is Bonham.

The Zeppelin has fewer solos than most groups but guitarist Jimmy Page (a Yardbird alumnus) is so strong and distinctive that even in ensembles his work is markedly personal. He knows everything about wah-wah pedal techniques and knocked me out with his long-line refrains played with a violin bow on the electric guitar strings.

At 23, Page is the Zeppelin’s senior member.

John Paul Jones plays bass and writes much of the Zeppelin’s stuff. He’s tremendously powerful, and has such arranging credits as Donovan’s Mellow Yellow and Sunshine Superman, as well as many of the Stones’ biggest hits.

The Zeppelin sticks pretty close to the blues in their sets. Their “How Many More Times” starts with a lazy Jimmy Yancey-style beat (or Elvis Presley for a later generation) and works up to a block-busting climax; Dazed and Confused features a Plant vocal that’s like an extra powerful male Janis Joplin, if you can imagine. [SF Examiner / Jan. 11, 1969]

Songs performed during this period include: Train Kept a Rollin', I Can't Quit You Baby, Dazed and Confused, As Long As I Have You, Killing Floor, White Summer / Black Mountainside, You Shook Me, How Many More Times, Communication Breakdown. 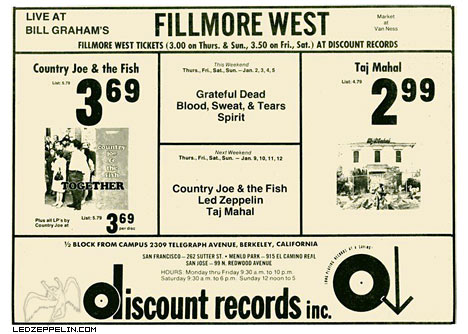 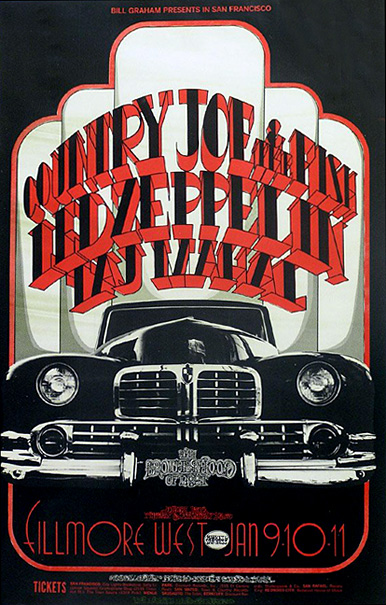 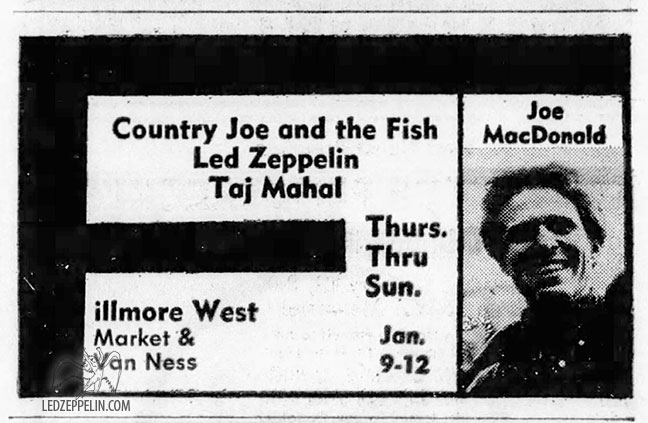 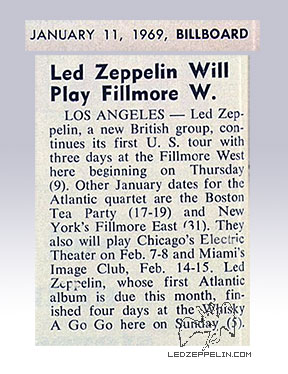 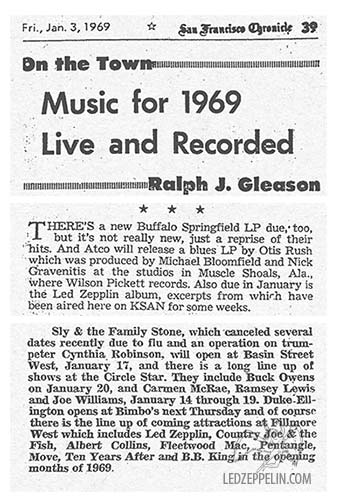 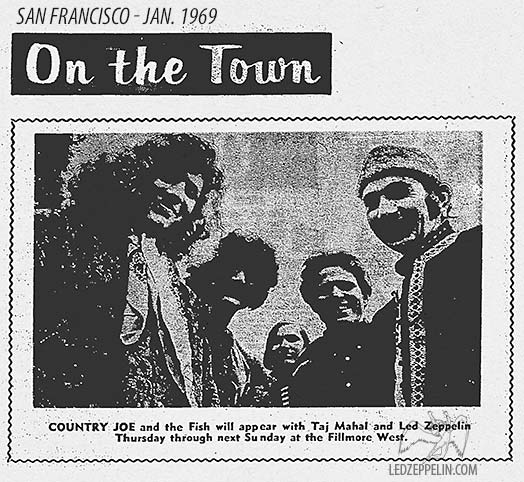 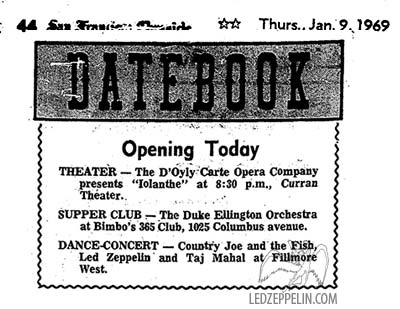 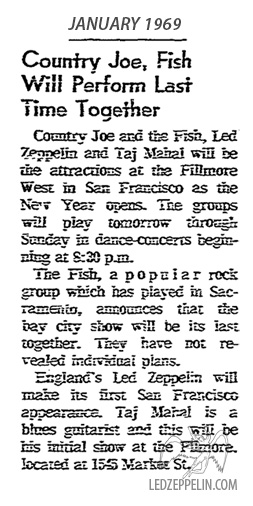 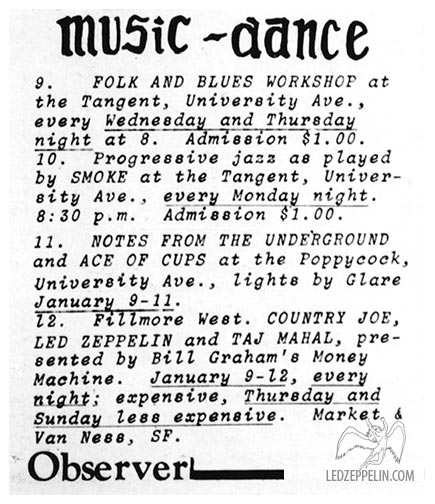 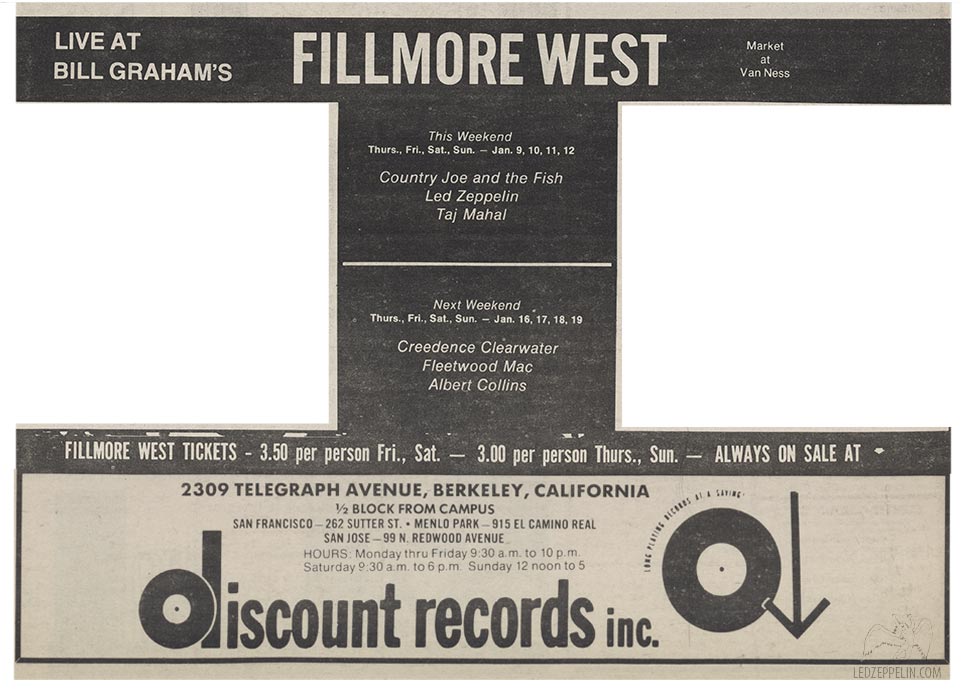 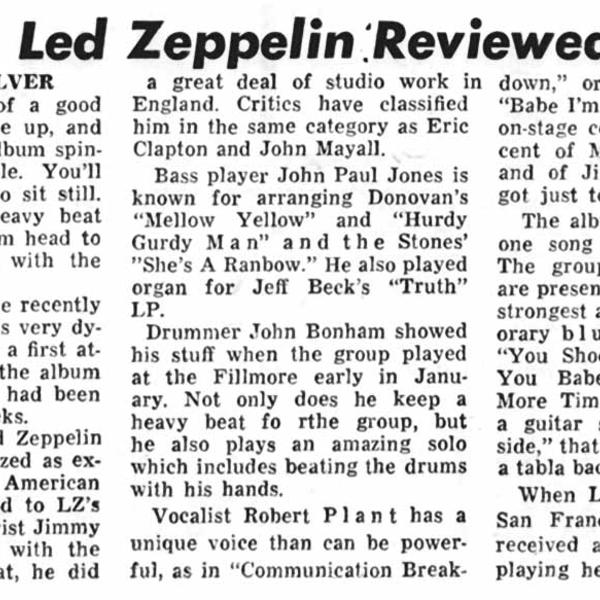