Press Review: August 11, 1979: Led Zeppelin, appearing live in Britain for the first time in four years, took a pasting from local critics after the first gig Aug. 4, but hit fine form a week later. The occasions were this year's 100,000 - capacity open-air concerts at Knebworth Park, 25 miles north of London, promoted by Frederick Bannister.

So-called "special guests," in the last but one slot on the Aug. 11 bill only, were Ronnie Wood and Keith Richards of the Rolling Stones, with Wood's recently-formed act, New Barbarians. Finally taking the stage as darkness fell , following a break of more than two hours after a set by Todd Rundgren & Utopia, the band's UK  debut started shabbily, but by the third number, "Breathe On Me," settled into respectable, down-the-line rock 'n' roll. '

So , what with Zeppelin's power-drive style seemingly little changed over the years, it was definitely salute the veteran’s night once the day's sets were over. Southside Johnny & The Asbury Jukes had preceded Rundgren, with Commander Cody and a new British duo, Chas & Dave, earlier still... (In place of the last named, Fairport Convention opened the Aug. 4 bill. It was a farewell gig for the long-lived English folk-rock combo, forced into demise by leader Dave Swarbrick's deafness.)

But although the music was a blast from the past, production of Zeppelin's two-and-a-half hour stint was strictly 1979, and first-rate. Main credits there go to Showco, a Dallas-based p.a. and presentation company used by the band for some eight years, and Ediophor, the Swiss video projection specialist.

The computer-controlled lighting rig included numerous special effects, of which the most remarkable were produced by lasers during a long solo spot by guitarist Jimmy Page. Standing in a pyramid of green light shone from a laser mounted directly above - which periodically rotated - he performed a long-familiar act using a violin bow on the guitar and playing through a variable-delay echo device. What was less familiar was that the bow was laser-lit along its length,  and thus appeared red; and carried another laser in the tip which shot a pencil-thin green beam over the crowd when Page waved the bow in ; the air. A new model, six-kilowatt video projector, shipped in from Eidophor and rigged behind a 40-foot by 33-foot screen at the back of the stage, was operated by Television International, a London-based facilities company and fed by a six-camera crew. It achieved bright, high-definition color pictures of special benefit to the audience on the edge of the arena, almost a quarter of a mile away.

The TV coverage, directed by Chris Boger, was specifically a Led Zeppelin venture, set up through Phillip Carson, local chief of the band’s Atlantic label. He says no plans have yet been made on exploitation of the resultant two-inch tape recording.

Although Edinophor machine was not running during the New Barbarians set, the cameras were. There is general reticence over the long delay before the band came on, but the word backstage was that there were arguments over the use of the TV equipment. With the barbarians not signed to a label at present, a likely – but unconfirmed – party to the contention was Ronnie Wood’s record company, CBS, which presumably has a stake in the footage).

Musically, Zeppelin seemed well-rehearsed, and Robert Plant’s gravel-down-a-chute voice strong and agile. The set started to gel after some 20 minutes with a hard, country-rock number called Hot Dog, from the band’s new In Through The Out Door album.

Thereafter, it was always the extrovert, bump-and-grind routines that came off best, rather than the attempts at a more contemplative style, which failed to “carry” in the big-show setting.  Stairway to Heaven however, with which the band closed before two encores, was a notable success ranging across several tempos and moods, and superbly sung by Plant, who ended up bathed in an effective rainbow backlight.

A third encore, Heartbreaker, was reportedly on the running order, but abandoned as the arena was clearing fast – by then it was 1 A.M. and the approving but finally unecstatic crowd seemed surfeited. Zeppelin, as an expatriate bastion of the British rock establishment, had proved via spectacular production values and solid professionalism it could mount a show back home worth $17 or anyone’s money, but enough was enough.

Seems promoter Bannister may be barred by local authorities from holding further concerts at Knebworth Park, the rural grounds of an ancestral home now occupied by the great-great-grandson of the first Earl of Lytton. On both nights, Zeppelin were still playing after the agreed midnight deadline and the nearby Stevenage municipality has become increasingly protective of its residents.
[-Variety / August 1979] 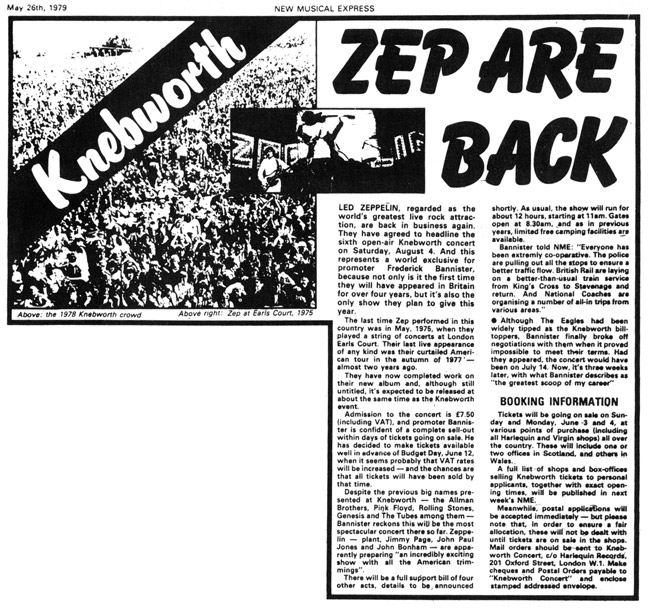 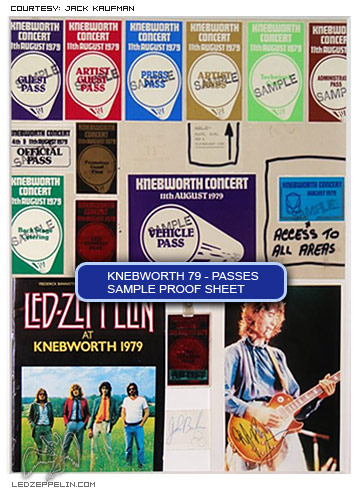 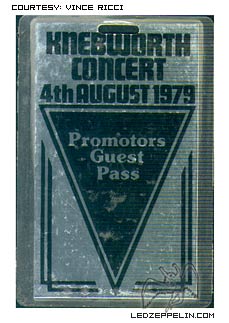 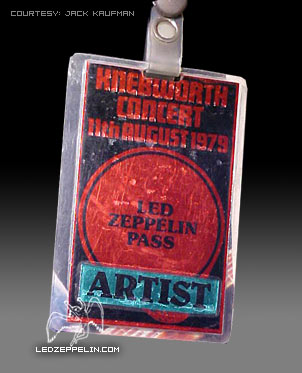 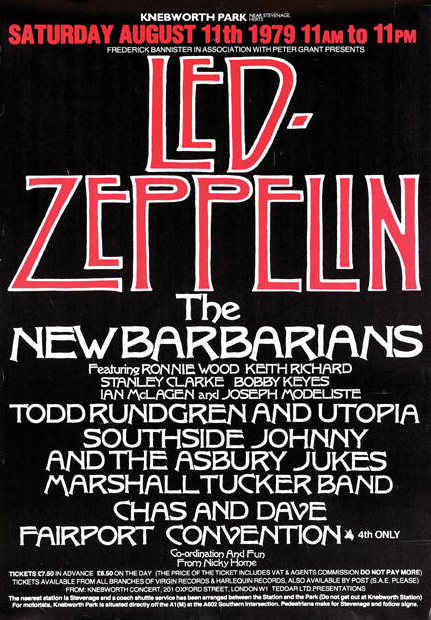 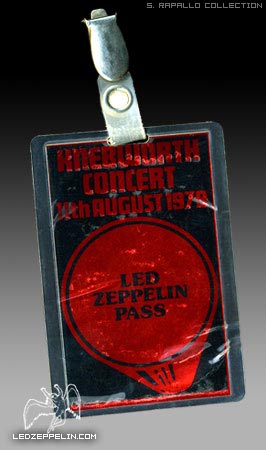 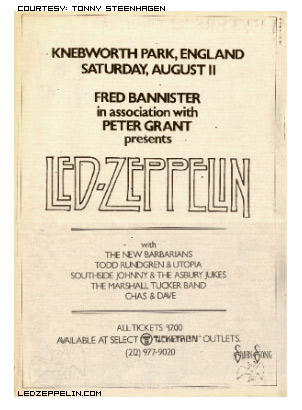 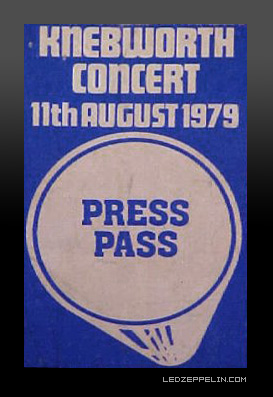 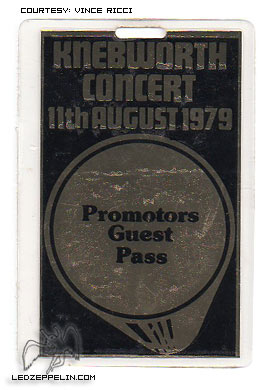 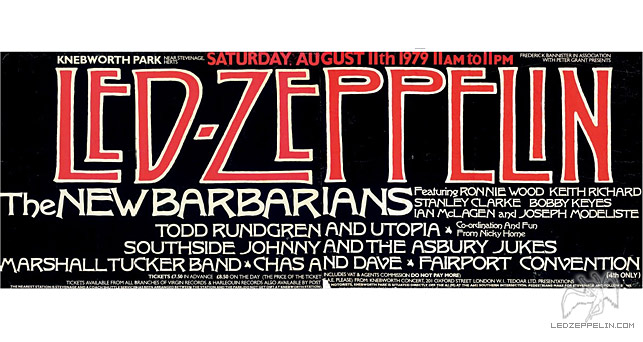 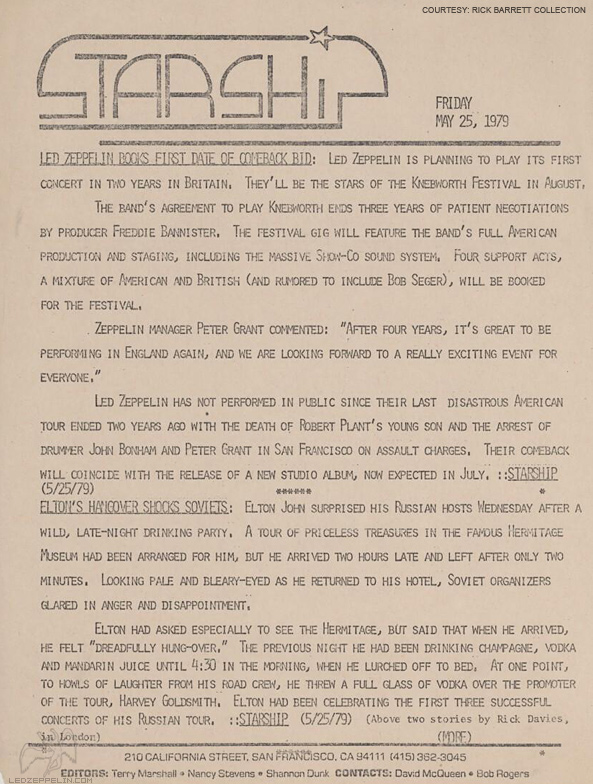 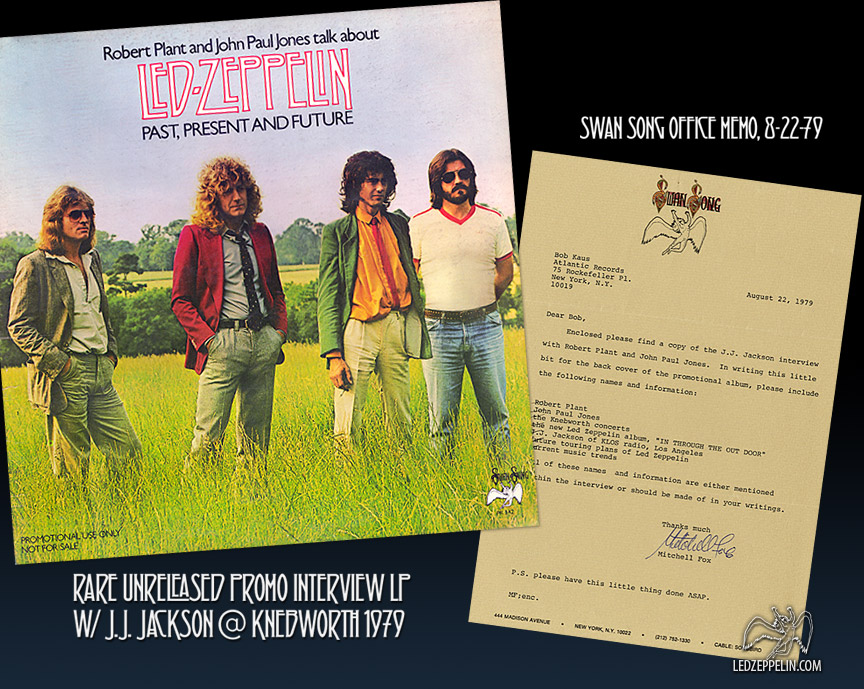 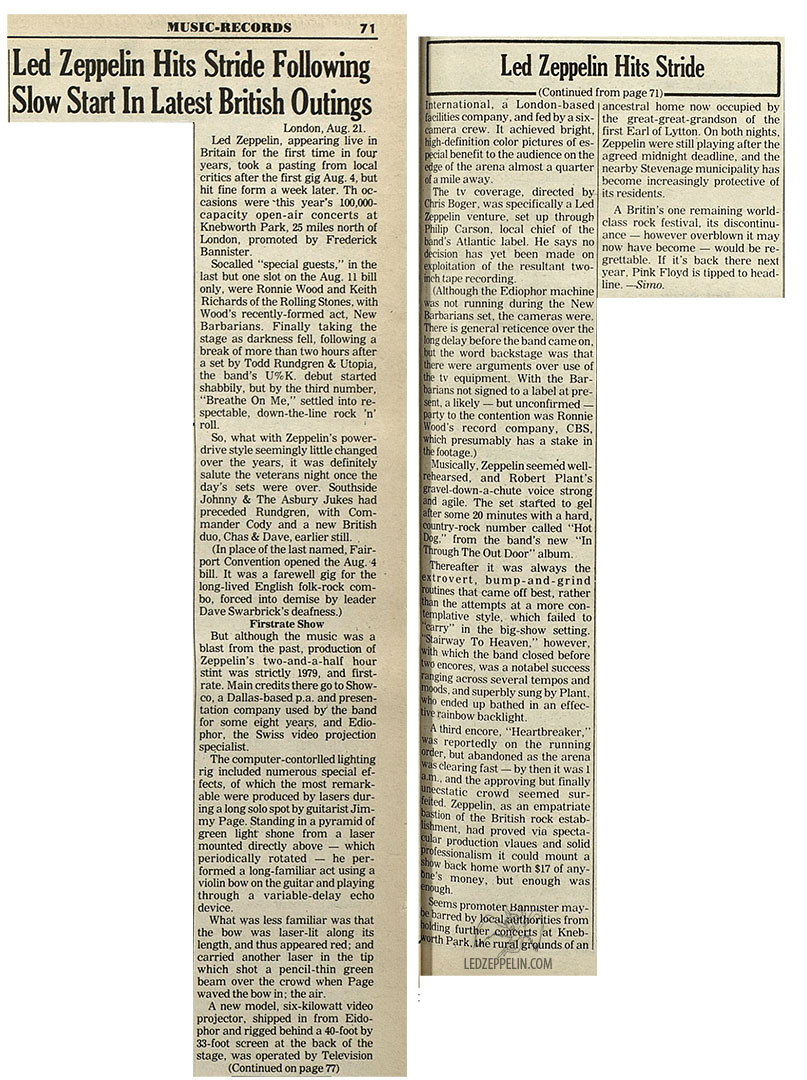 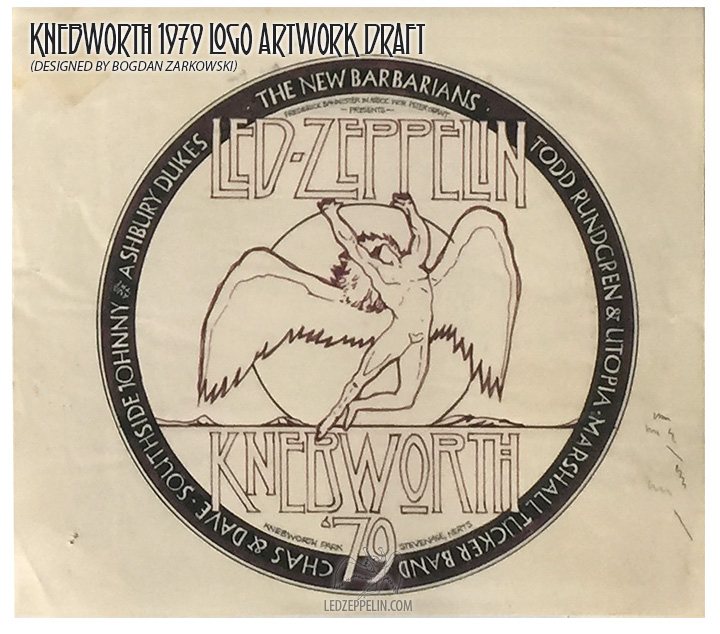 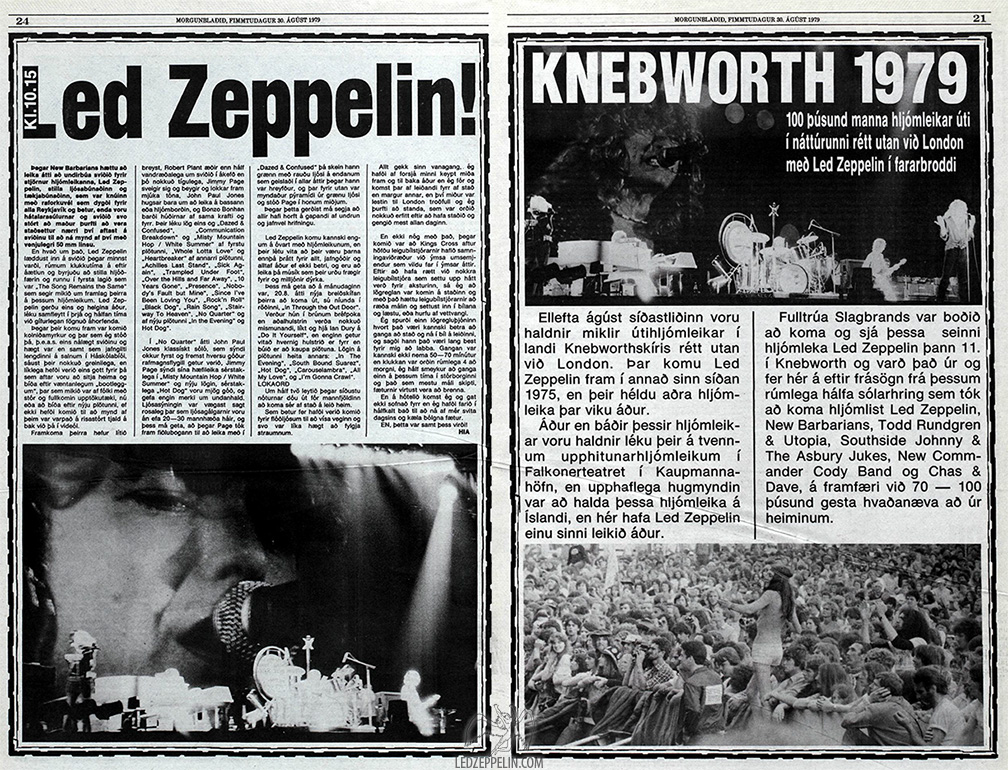 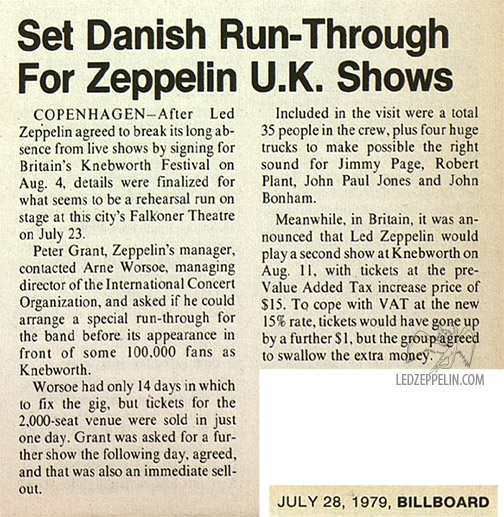 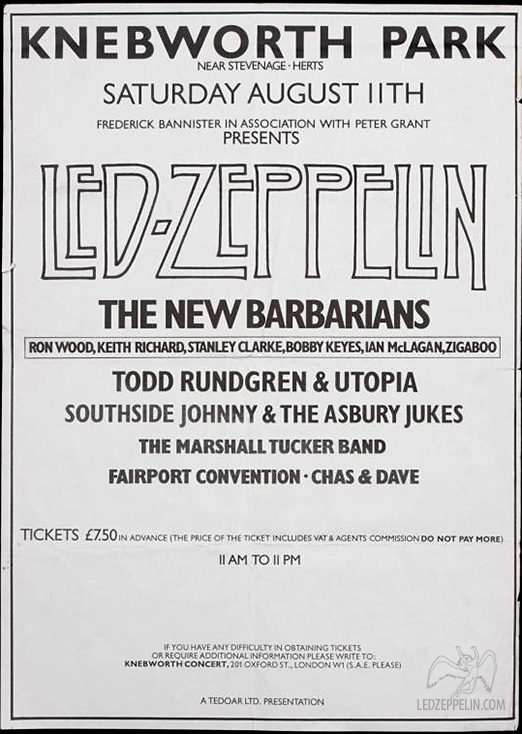 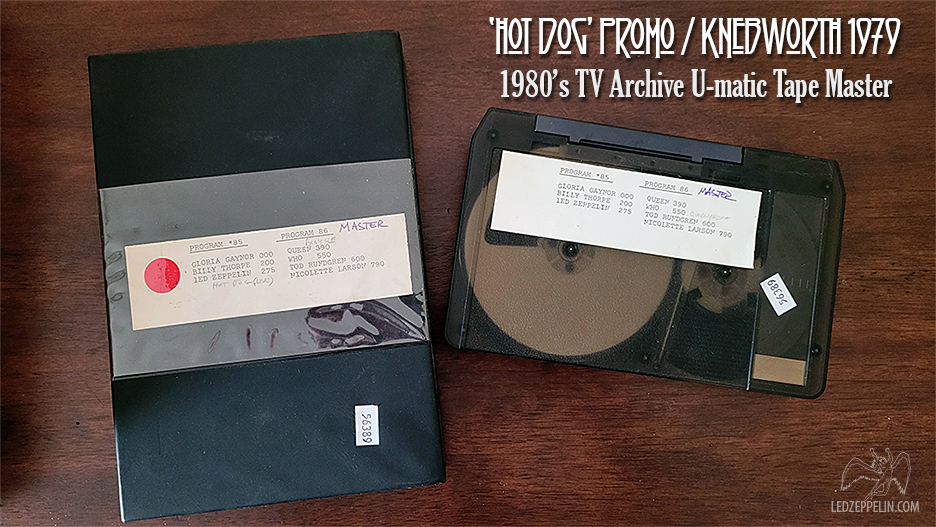 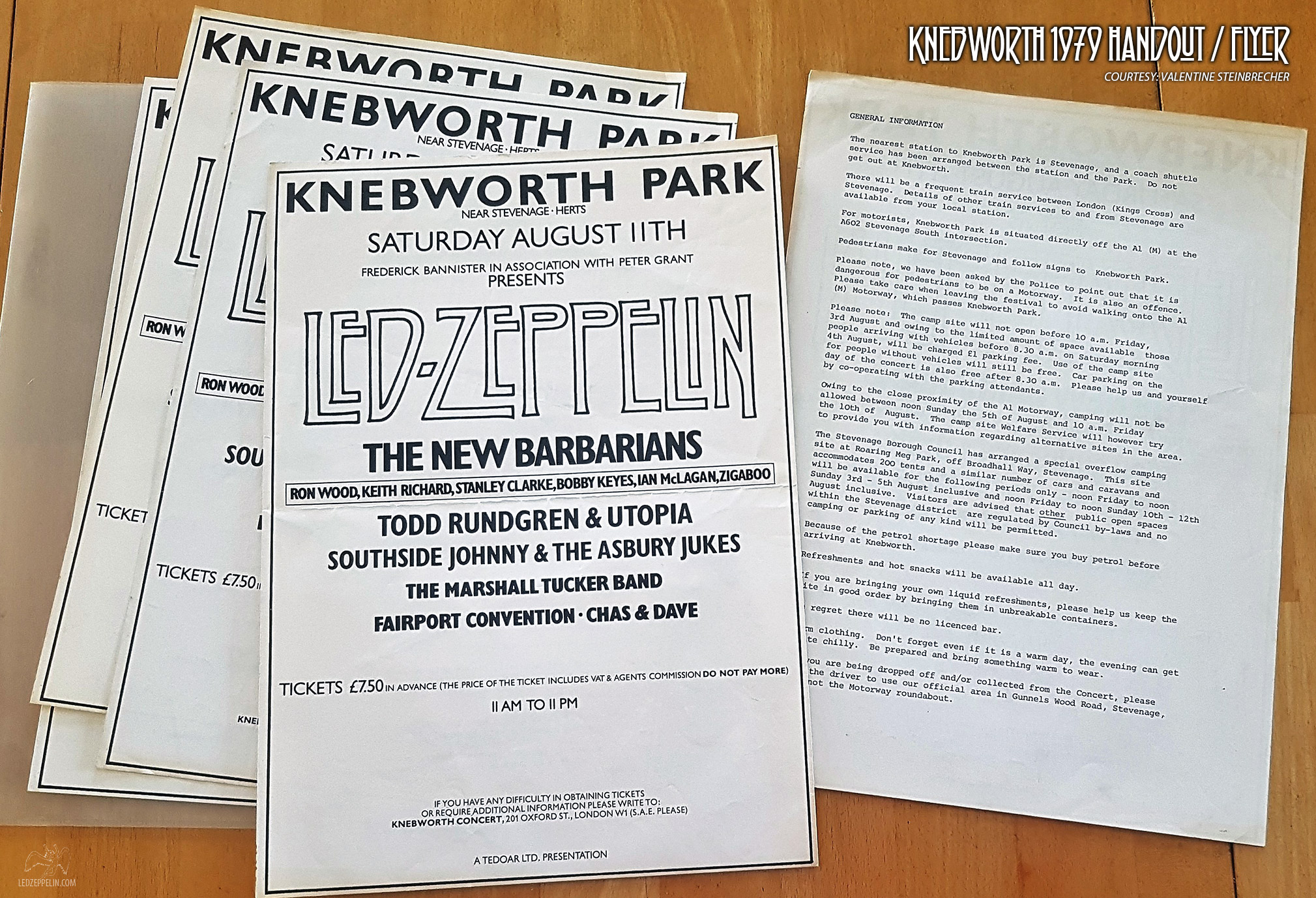