Immigrant Song, Heartbreaker, Since I've Been Loving You, Black Dog, Dazed and Confused, Stairway to Heaven, Going to California, That's the Way, Celebration Day, What Is and What Should Never Be, Whole Lotta Love (medley incl. Let that Boy Boogie, That's Alright Mama, Ramble On, Gamblers Blues, I'm a Man, Honey Bee), Weekend.

Zep return to play two dates in Montreux, preparing for their upcoming tour of North America.

Press: Easy triumph for Led Zeppelin
[Google translation] The space of this last weekend, the pop music regained its rights Montreux, bringing back in the city the crowd of the best concerts for the resumption of the crazy evenings of the Casino, it had been called Led Zeppelin. The group was unsurprising, that is to say, excellent habit, for a large audience despite the season of holidays acquired in advance and a little too hardcore. The ovation of entry, Saturday, was indeed indescribable for the four musicians, increased by the slight delay of their appearance.

Then, helped by a gigantic electronic apparatus, the training, for two years one of the most regularly rated all the hit - parades, held the 2,000 spectators in breath for more than two hours. Led Zeppelin, it is the guitarist Jimmy Page all-around, who puts a dazzling virtuosity accompanied by a great talent at the service of a rare faculty of invention. It is the vocalist Robert Plant, whose face is everything what he's an archangel is also, but a lesser degree of talent, a good bass player and of course, the drummer.

The group had quickly established its debut with a new sound and indisputable power, but its evolution is very slow, that is a little too much in the old successes, amplified sometimes the limit of the bearable. But Led Zeppelin has not yet said his last word, and a new path seems traced to him, why not, in a very pleasant folk-music, simpler, less tortured than what he offered us before. So there are some great moments in the concert, including Jimmy Page the bow's guitar solo, excellent dry guitar passages and, above all, an inspiring interpretation of Whole Lotta Love which, having started as usual, lost in brilliant improvisations to end, by a furious boogie and a blues of the best vein, on the initial theme.

Everyone, from the beginning of the song, had risen to dance, what the music invited them without restraint hallucinating spectacle ... The show continued off Casino, late in the evening, in the pouring rain under the covered market near the landing stage, wherever it was possible to find shelter; some of the themes of this evening were heard, awkwardly played on the guitar, memorable for most of those who lived it. [Fueille d’avis / J. R. / August 1971]

Immigrant Song, Heartbreaker, Since I've Been Loving You, Black Dog, Dazed and Confused, Stairway to Heaven, Going to California, That's the Way, Celebration Day, What Is and What Should Never Be, Whole Lotta Love (medley incl. Let that Boy Boogie, That's Alright Mama, Ramble On, Gamblers Blues, I'm a Man, Honey Bee), Weekend. 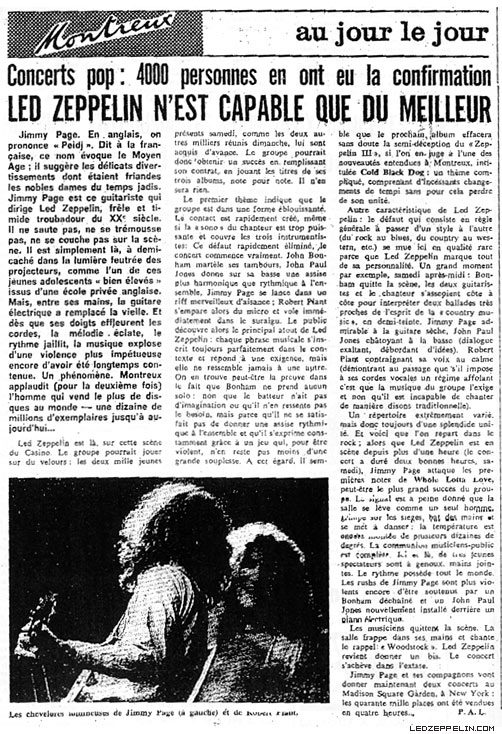 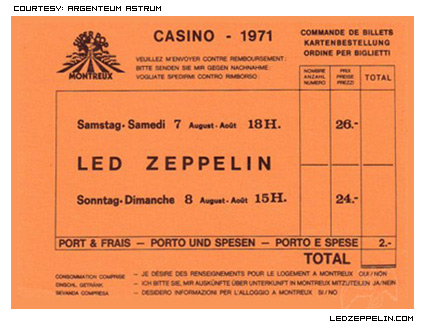 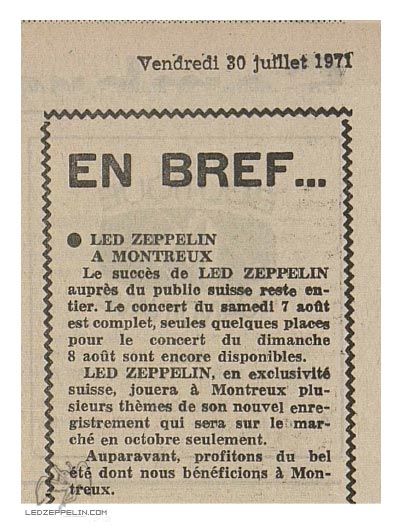 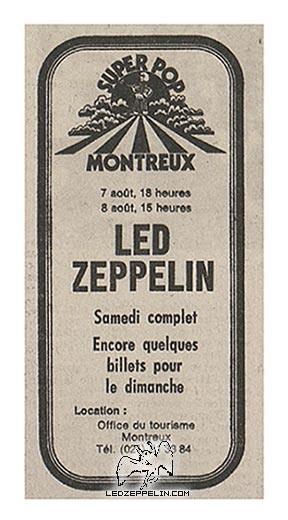 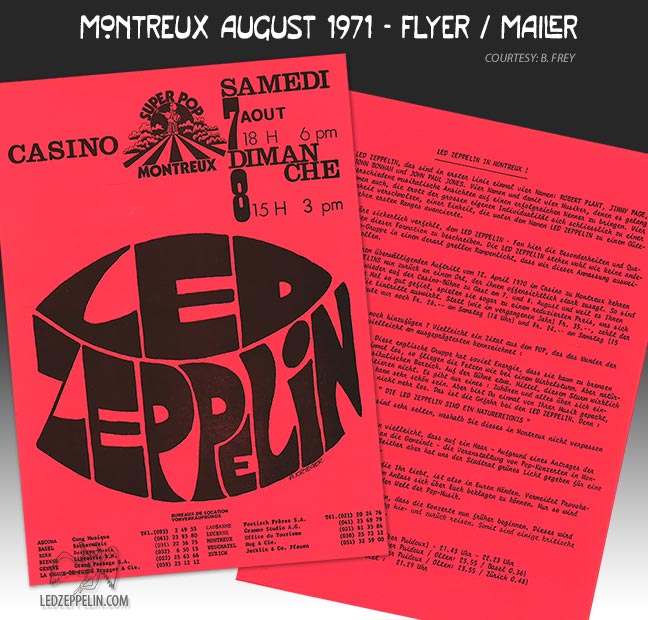 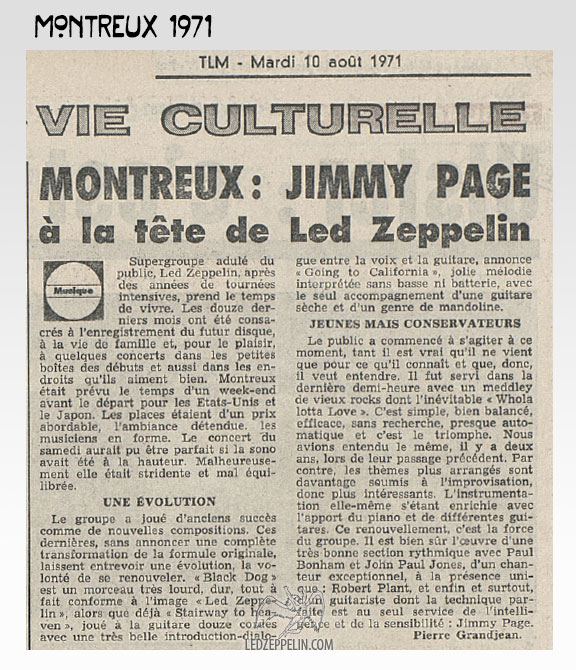 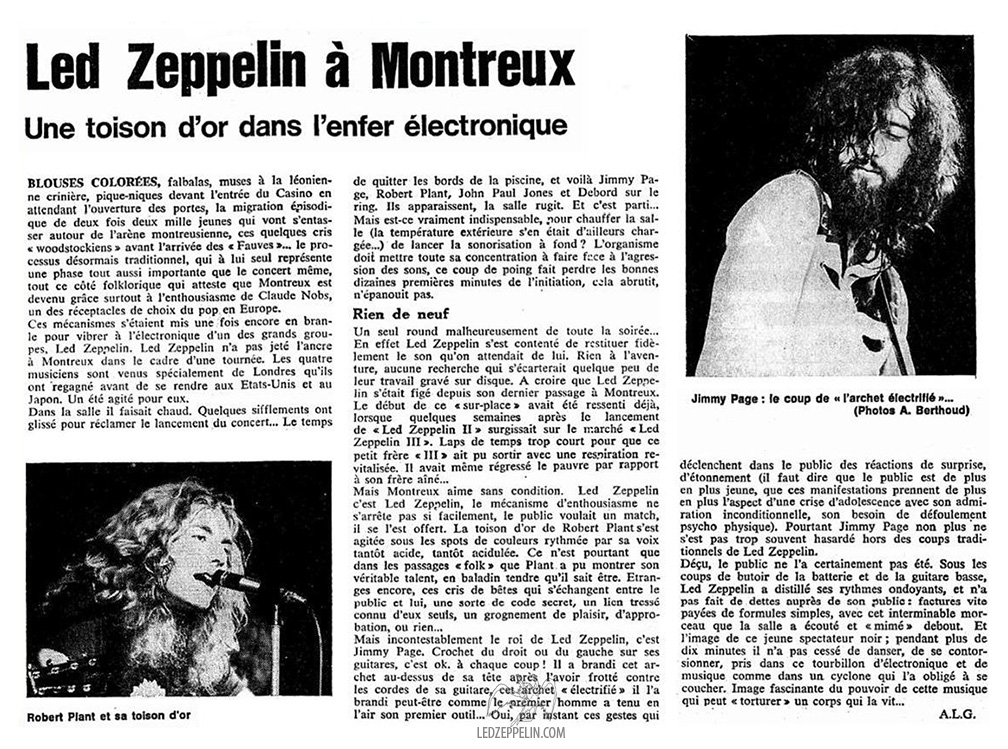 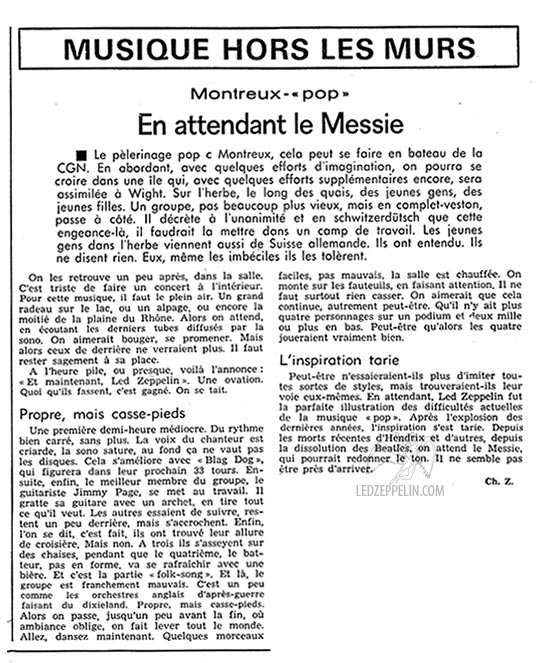 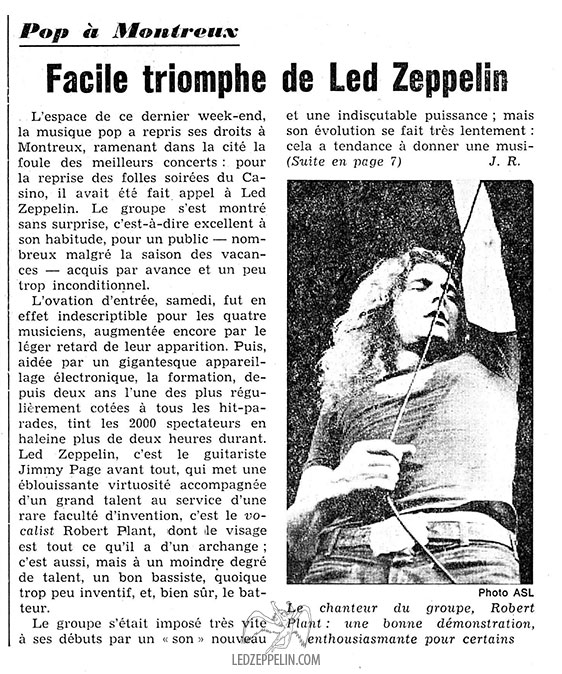