My vocabulary is much too limited to describe how great Saturday’s Led Zeppelin concern was. Jimmy Page was incredible, as he changed guitars almost as often as he changed songs. Even looking through the most powerful binoculars, Page’s hand was nothing but a blur. Page was unquestionably the driving force in the Omni on April 23.

Robert Plant’s highly touted voice exceeded every expectation that I had dreamed of. I had heard stories to the effect that Plant had the misfortune of losing his microphone in one concert. He simply sang without one, loud enough to be heard throughout the arena. The story seemed a little half-baked before Saturday night. There is no doubt in my mind now that the story was completely baked.

Jimmy Page is simply the master of sound. His hand seemed to become rubber as it slid up and down the neck of his several guitars. During their accoustic set, Page played what appeared to be a lute. This was a prelude of what was about to take place. Page was then out on stage, Les Paul in hand. The audience went wild as Page evoked sounds from that guitar that were beyond the imagination. This set the stage for some of his antics. The first was to bring out his bow and play his guitar as if it were a cello. Next, Page drew loud squeaks from the sound system that were apparently sounding at the command of his hands.

John Paul Jones and John Bonham, the other two members of the group, were nothing less than superb. Both John’s are grossly underrated. Saturday night they demonstrated that they too deserve to be on the same stage as Jimmy Page.

Bonham played the drum solo in Moby Dick to the hilt. Here he employed one of his old tricks, playing the drums with the palms of his hands. This was in addition to the incredible foot rhythm that he maintained throughout the concert. Jones was highlighted during one of Zeppelin’s best concert numbers, No Quarter.

Special effects have never really added anything to a concert as far as I’m concerned. That is, until I saw the shaw Zeppelin had planned. Four lasars formed a box around Page. As he picked up in tempo, the lights began to revolve around him, picking up speed until they seemed to form a barrier. The show was expertly mapped out. The group’s every move seemed relaxed, yet perfectly timed.

Many have labeled Zeppelin a “Heavy Metal’’ band. I would have to take exception with that label. “Heavy Metal’’ conjures visions of Black Sabbath or Kiss. I have yet to see a “Heavy Metal” band drop into an accoustic set, or play a 15-minute jazz inspired piano solo. Zeppelin is a finely honed group of rock musicians that are peerless at the present time.

After all has been said, the trouble I went through to get tickets seems so insignificant when compared with the reward of seeing Led Zeppelin in concert. I do not anticipate ever spending a more enjoyable evening at a concert.  [April 1977 / by John McCosh , OpenDoor]

Press Review (2): Led Zeppelin satisfied a two year old commitment to Atlanta with a long awaited performance in the Omni last month. Robert Plant, now fully recovered from an auto accident in Rhodes, Greece, was in peak physical condition. The band had been plagued with illnesses that came close to canceling the Atlanta date a second time. Plant contracted tonsillitis as the tour was set to start and the Texas dates were canceled.

The group began rehearsals for their three and a half hour concerts last November, spending as much as ten hours a day in preparation.

The Atlanta audience, having been well plied with the film The Song Remains the Same, greeted Led Zeppelin with a tremendous ovation and lit the hall with matches, even though they arrived thirty minutes late.

Even with their great wealth of material, Led Zeppelin chose to retain those timeless epics from their nine year history. Drawing evenly from their last two albums, the most impressive quality of the performance was that the group could indulge in a free form jam during their longer cuts without destroying their chemistry.

Battle of Evermore (note: author is referring to No Quarter) was one such featured production which included a laser show synchronized with the music. The audience sat patiently through their longer pieces, not seeming to be too interested with the amazing versatility that John Paul Jones has on the piano. Achilles and Kashmir received thunderous ovations but the band laid back for an acoustic set before cutting loose again.

When Led Zeppelin comes to mind, most people do not readily think of the several acoustic numbers that the group has written. Therefore, the group was provided with a chance to sit in a small semi-circle and work out a few of the softer melodies.

The crowd became anxious when the evening drew to a close with still no Stairway to Heaven. Lo and behold, their patience was rewarded at the closing of the performance.

It was an exceptional evening for Robert Plant who strutted about, shirt open to the waist, voice resonating through the hall in perfect harmony with the band. Jimmy Page was absolutely on fire. He was solid, powerful and penetrating and conducted a one man symphony when violin bow was applied to guitar string.

Without exception, every Led Zeppelin concert has sold out in record breaking time. When most groups hardly expect to see their tenth birthday, the Zep has every indication that assures a long life yet to come. Will you still need me, will you still feed me when I’m 64? [by Murray M. Silver Jr / Creative Loafing, May 1977]. courtesy Mike Tremaglio collection. 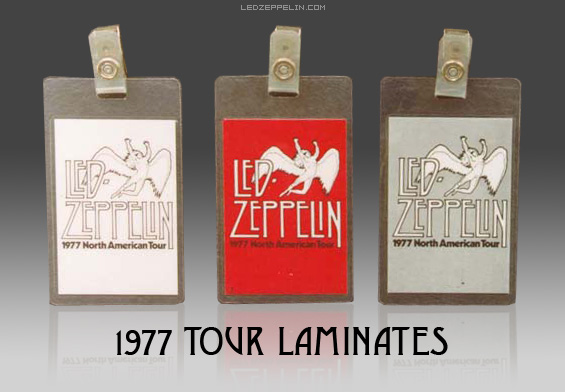 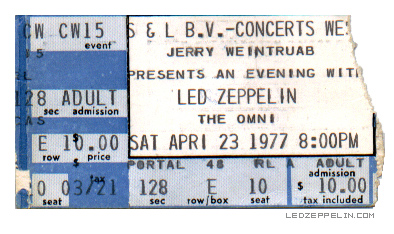 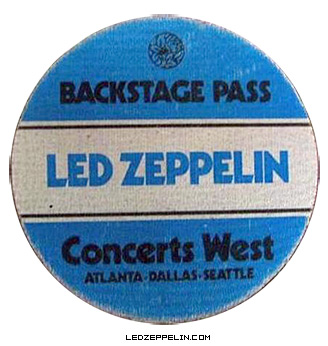 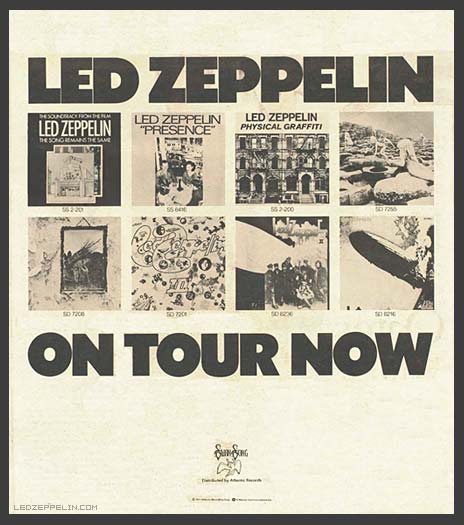 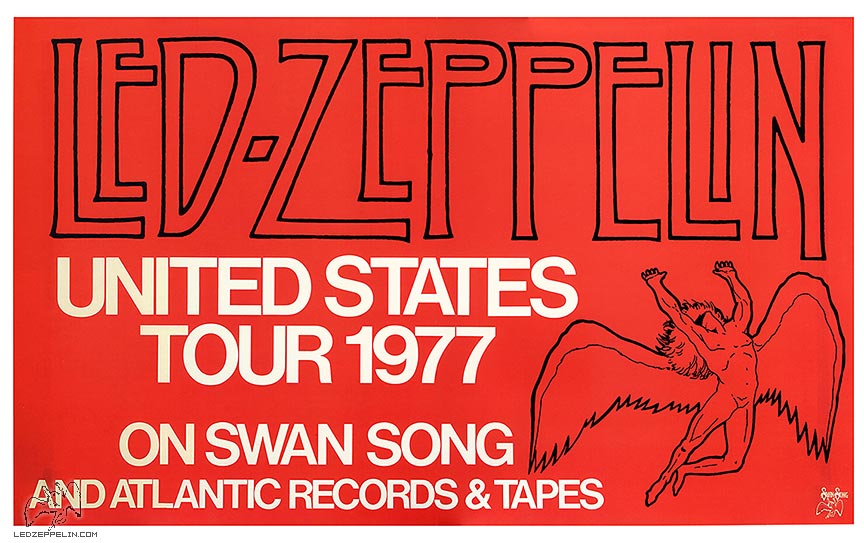 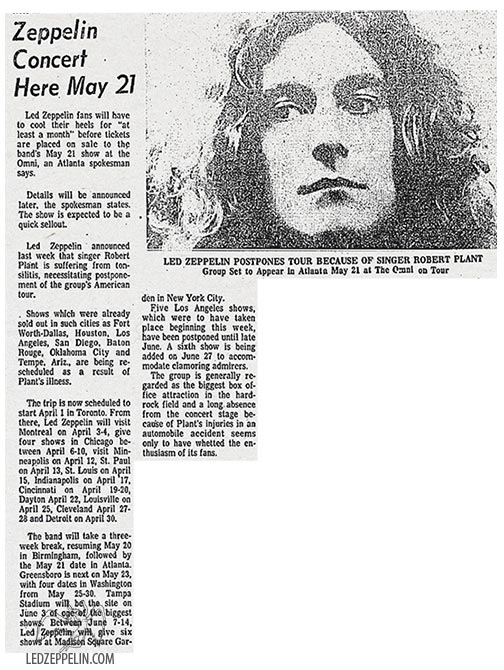 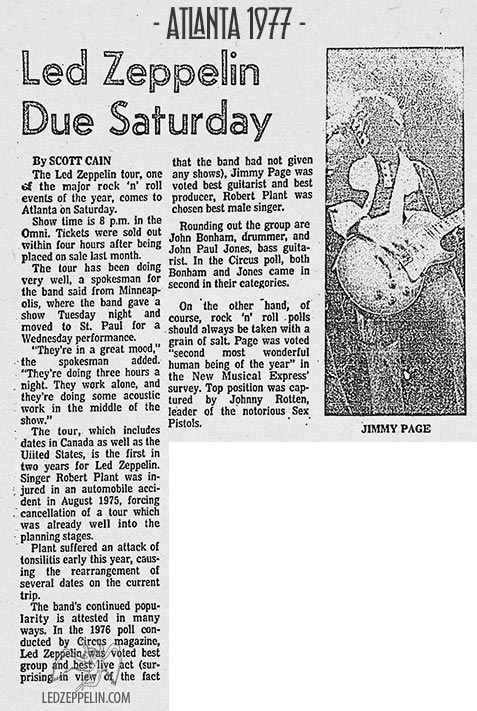 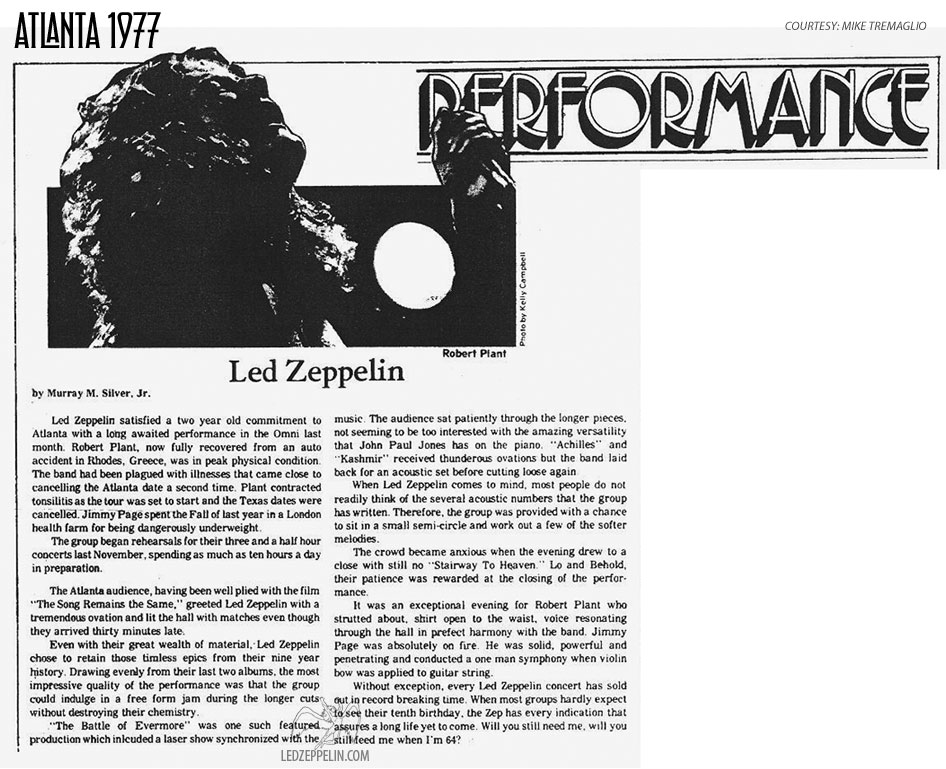 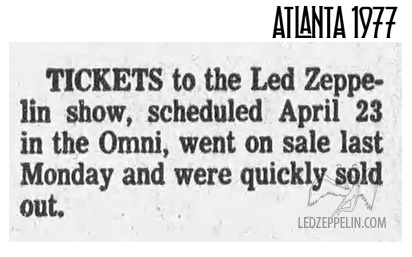