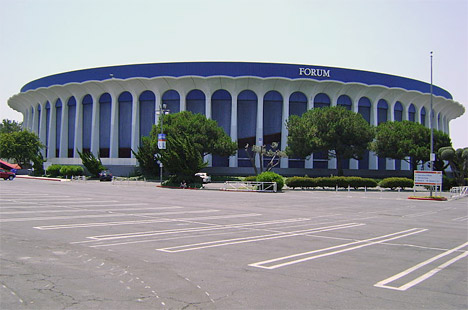 The Forum, known for a time as the Great Western Forum, is an indoor arena in Inglewood, California, a suburb of Los Angeles.

The "Fabulous" Forum, as it would become colloquially known to locals, was constructed by Jack Kent Cooke, owner of the Lakers and founding owner of the Kings, in 1967. The circular, $16 million structure was designed by reknowned Los Angeles architect Charles Luckman and was intended to evoke the Roman Forum. The arena seats 17,505 for basketball, 16,005 for ice hockey, and up to 18,000 for concerts; it has no luxury suites, but held an unprecedented 2,400 club seats for events.

The Forum became a landmark in the Greater Los Angeles Area, in large measure from the success of the Lakers and from the Hollywood celebrities often sighted in its audiences. It hosted a vast number of events such as tennis matches, rock concerts, boxing matches, ice shows, rodeos, indoor soccer, and political events. It is sometimes referred to as the Los Angeles Forum or L.A. Forum to differentiate it from other buildings, venues and places carrying the name "Forum".

In 1979, Cooke sold The Forum to Jerry Buss along with the Lakers and the Kings for a then-record $67.5 million. The Forum is currently owned by the Faithful Central Bible Church, which uses it for its Sunday morning service.  (Wikipedia)